A great place to live!

We care about the area in which we live. We are fortunate to have a good environmental team who do a lot of regular work on litter, leaves, and similar. They also are in good contact with the available support from WCC and MKC.

Rear alleys to the houses

In 2018, the two brothers, Derek and Terry Weller, have lead the work of clearing the back alleys to the houses in Tinkers Bridge. These had largely become overgrown, often filled with rubbish as well as vegetation. As can be seen from the photo, they have done a splendid job, including spreading wood chip down them, supplied by the WCC environmental team. The alleys are now usable as means of emergency egress from the buildings, which has not been practical for years.

If we all care for our area, it should be relatively easy to keep these alleys in good shape. 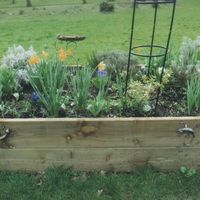 In 2017, we received funds to improve the raised beds and overall environment in Tinkers Bridge. We have bought wood to replace the boarding round the current raised beds, as the existing is beginning to rot. Help is still needed to fit these boards to some of the beds. The beds have been planted out, and are available for the enjoyment of residents. Several of them have herbs or fruit growing in them, and you are welcome to help yourself to a few herbs of any ripe fruit.

Thank you to the team who worked so hard on these, to WCC for their grant , and to Tescos for the "Bags of Help" grant

This event supported by Grant Aid from Wougton Community Council

Cutbacks over recent years have resulted in the council funded litter picks becoming more and more infrequent. Milton Keynes council publish dates when each area will have street cleaning, which for Tinkers Bridge in 2018 is "Thursday Weeks 1, 3, 5 and 7" of the 8 week cycle. This is 28 May, 11 June, 25 June (as of May 2018)

State of Roads and Pavement 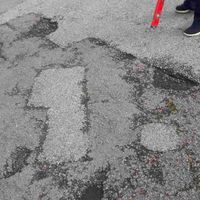 There has been long-standing problems with the state of roads and pavements in Tinkers Bridge, which is due, not only to traffic wear, but also to tree roots.

In order to put pressure on the Council, John Orr and David Lee, in March 2016, photographed potholes, and sent a dossier of 112 photo to Milton Keynes Council. Two representatives of the council wisted the estate, and walked round it with David Lee, but only limited repairs were then done, such as getting a damage water board mnhole cover replaced. As a result. the TBRA policy of assisting any residents with claims against the council was adopted, with the dossier of photos being available as evidence that the council has been informed of hazards of this nature in Tinkers Bridge. The count of potholes was reported in the local press

Between 13 and 18th April 2018, a number of potholes on Aldenham, the main connection road in Tinkers Bridge were repaired, and potholes was an active point of debate in the council during the run up to the May elections.

Liz Iddon reported on 17 May via Facebook of a pair of marked potholes, where only one had been repaired. This include Councilors Sue Smith, Hannah O'Neil, and Kevin Wilson all posting on that Facebook thread.

Pride in our estate 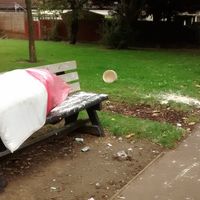 It is great when we can look round our estate and see the good things that people do - like the raised flower beds, the tidy gardens, the care for neighbours. Unfortunately, it seems that not everyone is prepared to do things right for the sake of others, and the attached photo shows an example of what should not happen. This mess was at the end of Buckby, near the play park, on 26th September 2016. It is fly tipping, which is an offense, and TBRA will support the prosecution of offenders. If you have any information about who is doing such activities, please let TBRA know - email info@tinkersbridge.org.uk

Woughton Community Council Landscape Team The guys who do the work locally
web site retrieved on, 2018-05-18